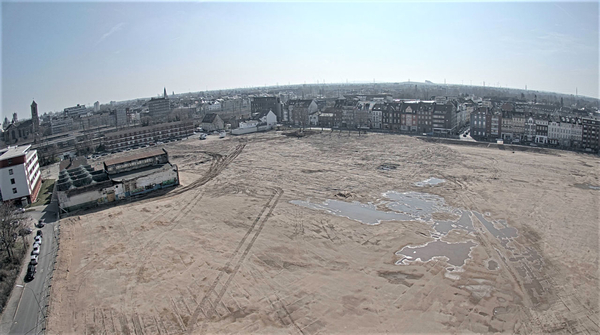 P+B Group, property developer and project developer headquartered in Sankt Augustin near Bonn, acquired the approximately 50,000 square metres Inbus Quarter, located directly next to Neuss's main railway station, from bema group in Düsseldorf. The seller and buyer have agreed not to disclose the purchase price.

bema group was the owner of the ruinous area close to Neuss's main railway station since 2016, where the group carried out urban repair.

To develop the conversion area of the former Rheinischen Schrauben- und Mutternfabrik Bauer & Schauerte, bema group has already conducted an urban planning competition together with the City of Neuss and developed a planning law for a modern urban quarter. The disclosure decision for the development plan is the next procedural step. The entire area has been largely deconstructed and decontaminated by bema.

Building on this, P+B Group is starting its planning for the development of the Inbus quarter on a very good basis and in close cooperation with the City of Neuss. The goal is to realise a mixed, social and sustainable urban quarter which, due to its location and size alone, will have a townscape-defining character. Identity-creating buildings of the former screw factory are to be preserved and put to new use. In addition to a high proportion of residential units, the following are also planned in accordance with the decision on the development plan: offices and hotels, local supplies, daycare centres, social and cultural facilities as well as green and open spaces.

"One of our key business areas includes brownfield and land development, which we have now been able to successfully implement in Neuss with the completion of the selling process. With P+B Group, we have placed the project in the hands of a project developer after completing our work. They will implement the project in line with the concept developed together with the City of Neuss," says Ralph Schneemann, Managing Director of bema group.

"The Inbus quarter perfectly fits into the profile of our projects," emphasises Gerd Hebebrand, Managing Partner of P+B Group. In addition to several other quarters, P+B Group has, for example, developed the almost equally large "Parkend" in Frankfurt's Europaviertel district as a sub-project of the conversion of the former goods station into a residential quarter that has won several awards. "We will develop the Inbus quarter with a high sensitivity to its industrial history and a holistic, integrated concept into a future-oriented urban quarter with a modern energy and mobility concept and, above all, create new living space in the Düsseldorf metropolitan region," says Gerd Hebebrand.

When acquiring the Inbus quarter, P+B Group was advised and supported by law firm Meyer-Köring in Berlin as well as the notary’s office Arnoul, Möller & Plantiko in Frankfurt. bema group was legally advised by the law firm Taylor Wessing.

P+B Group, headquartered in Sankt Augustin near Bonn, is a high-performance property developer and project developer boasting nearly 20 years of market presence and a compelling track record. The project volume realised to date amounts to more than 600 million euros.

The product range of P+B Group is broadly diversified. In the residential segment, it ranges from single- family homes and multi-storey flats to micro and student apartments to complete urban neighbourhoods. In the commercial property sector, the group develops and builds offices, retail space and hotels.

Long-term value creation and sustainable asset growth are the hallmarks of the properties realised by the group. The group works independently of banks and implements its projects with a high proportion of equity capital thanks to shareholders with excellent credit ratings. Today, the project developer and property developer employs around 40 people at its locations in Sankt Augustin, Frankfurt and Stuttgart. With a project development volume of more than 1 billion euros, P+B Group is still on a track of dynamic growth.

bema is an owner-managed project development company in Düsseldorf with the claim to create future-oriented buildings and sustainable urban quarters with a long lifespan. A responsible and mindful approach to finite resources, grown structures and valuable partnerships as well as a strong own identity are the hallmarks of the third generation of the company. Innovative future-oriented topics like choice in digitalisation, concentration on alternative, natural building materials such as wood or recyclable modular building systems are always included in the concept. As a result, architectural and high-quality residential, office and mixed-use neighbourhood projects have been developed in the Rhineland in recent years. bema distinguishes itself through a sound, steady growth within the selected asset classes, further development