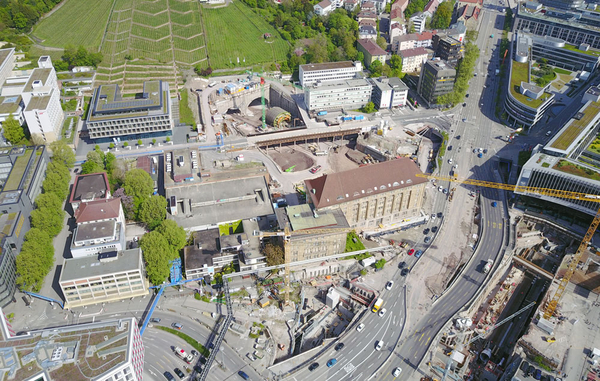 (Stuttgart, 5 March 2018) Future visions for one of the most attractive areas in the centre of Stuttgart: A total of six urban planning and architectural offices have developed ideas for the urban redevelopment of the area around the listed "Old Railway Directorate" (Alte Bahndirektion) in the heart of Stuttgart as part of the urban development competition. The ideas were decided at the final jury meeting on 28 February 2018 in Stuttgart’s House of Commerce (Haus der Wirtschaft). As a result, the jury, chaired by architect and urban planner Wolfgang Riehle, awarded two second places to KSP Jürgen Engel Architekten, Frankfurt, and Wick + Partner Architekten Stadtplaner, Stuttgart, in order to give the two most promising participants the opportunity to further revise their designs.

P+B Group (St. Augustin, Frankfurt am Main) recently acquired the core area of the competition - an approximately 13,400 square metre site between Kriegsbergstrasse, Jaegerstrasse, Ossietzkystrasse and Heilbronner Strasse – from the two joint venture partners W2 Development and Competo Capital Partners. W2 Developement GmbH had initiated procedural steps for the urban development of the site in advance, which it will now complete in cooperation with the City of Stuttgart after the change of ownership. Commercial, residential and hotel facilities are generally permitted on the site. As Gerd Hebebrand, Managing Director of P+B Group, explained: "The site and the extended surrounding area are among the most interesting and most influential urban areas in the entire state capital. That is why we were curious to see how the planning offices would respond to the area in their contributions. Even though individual aspects in the respective drafts certainly appealed to us, we share the opinion of the jury that there are two runners-up who now have the opportunity to revise their drafts in a revision phase in accordance with the specifications of the jury. Based on this, we shall then examine the individual utilisation scenarios and clarify their implementation with our partners". The chairman of the jury, Wolfgang Riehle, summed up the results of the meeting with the following words: "A regulated competition according to RPW once again proved to be a suitable instrument for finding the best solutions in one of Stuttgart's most characteristic cityscape scenarios. The jury recommended that both prize winners be given the opportunity to further optimise their designs in a revised version. All decisions of the jury were unanimous after sometimes very passionate discussions. Decisive for the choice of the prize winners were the scaled dimensioning of the individual quarters, the axes of vision to the vineyard and the quality of the public spaces". Stuttgart's construction mayor and jury member Peter Pätzold commented on the results: "All the contributions show some very interesting approaches.Regarding the two works selected for revision, the jury was convinced by their town planning qualities. In particular, the newly opened view from Strassburger Platz to the vineyard offers an attractive perspective, which takes up and further develops the future urban redevelopment resulting from the new central station".

Designs now on display at the city planning office
The site to be developed in the core sector for the competition included the newly acquired areas of P+B Group with a total size of almost 13,400 square metres in the eastern part and around 8,340 square metres in the western part, which are owned by the city and a private owner respectively. In addition, the area north of Jägerstrasse with 12,778 square metres of space was also offered as an area for ideas. All six designs for the planned area are on display from now on until 16 March 2018 on the first floor of the Office for Urban Planning and Renewal in Eberhardstrasse.

Building permit by the beginning of 2020
The property of P+B Group in the heart of the core area of the competition – as well as the neighbouring areas – is currently still being taken by Deutsche Bahn AG for work on the northern end of the Stuttgart-21 project. The aim of P+B Group is to obtain one or more building permits by the time the property is returned. Based on the final results of the competition, the next step will be to produce a new development plan, which was already initiated in 2017 with the approval of the construction plan.

Experience in the Stuttgart market
P+B Group is a bank-independent property developer with many years of experience in the Stuttgart market. In addition to the Alexanderstrasse residential project and a student residence in Stuttgart-Vaihingen, which P+B realised together with the architects Willwersch Architekten, the group is currently planning a hotel project with more than 500 beds – also in the Vaihingen district. In total, P+B is currently planning projects with a total volume of around 700 million euros. The group is primarily active in the German state of Baden-Wuerttemberg and the Rhine-Main region (Hesse) and constructs real estate for its own use as well as for private and institutional investors. One of the company's largest real estate projects is the "Parkend" residential project in Frankfurt's Europaviertel district with 816 residential units, which is currently nearing its final completion. In addition, P+B is currently developing the Porsche Design Tower, a residential tower also in Frankfurt/Main.

About the previous owners and project managers

W2 Development GmbH
W2 Development GmbH was founded in 2008 by the architect Stefan Willwersch and the businessman Frank Widmann. The office consists of a team of architects and real estate experts. Since then, mainly commercial real estate projects with a total volume of around 200 million euros have been successfully realised and sold. Projects with a total volume of 220 million euros are currently under construction and further projects worth more than 80 million euros are in the planning phase.

Competo Capital Partners GmbH
Competo Capital Partners GmbH is an independent, owner-managed investment and asset management company. Its core competencies include individually tailored investments in German project developments with equity and mezzanine loans as well as long-term investments in existing properties. In this context, Competo supports a small and selected number of institutional investments, almost exclusively in the fields of foundations and family businesses. In project developments, Competo Capital Partners participates with equity and mezzanine loans in selected real estate developments by experienced developers in Germany in the office, residential, logistics and retail sectors via the "Competo Development" investor community it manages.  On average, the company's investment portfolio comprises around 15 equity investments with an investment volume of around 800 million euros and roughly 10 mezzanine investments with an investment volume of around 600 million euros. As an asset and investment manager, Competo currently manages a portfolio of 11 properties with an investment volume of approximately 600 million euros in the Munich, Hamburg, Düsseldorf, Stuttgart and Ulm locations.